Paper, like cloth, is fiber: paper can be stitched, fused, glued, torn or collaged; and paper can serve as the substrate for all manners of surface design. I first combined fabric and paper in 2006. A favorite medium is used coffee filter art. Rinsed and saved for their soft brown stains and intriguing patterns, the paper filters are infused with memories of friends and fellow artists and recall the lively discussions over a shared a pot of coffee. I find the coffee-mottled paper reminiscent of images of old women and men. Dried coffee marks represent time passed, experience and wisdom. I work with filters, commercially printed papers, mulberry paper, hanji, and the papers I hand-paint, draw & print papers in my studio. The papers take the form of standing scrolls, collage books, paper collage on board and art quilts with applied papers. 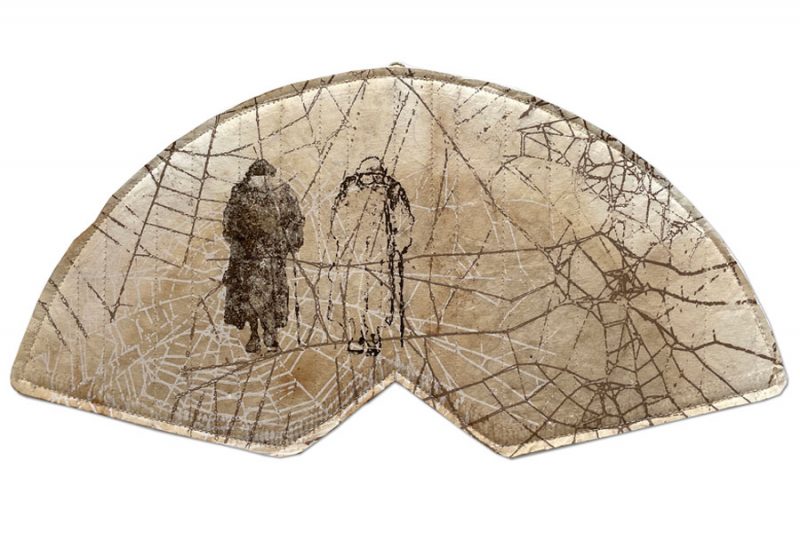 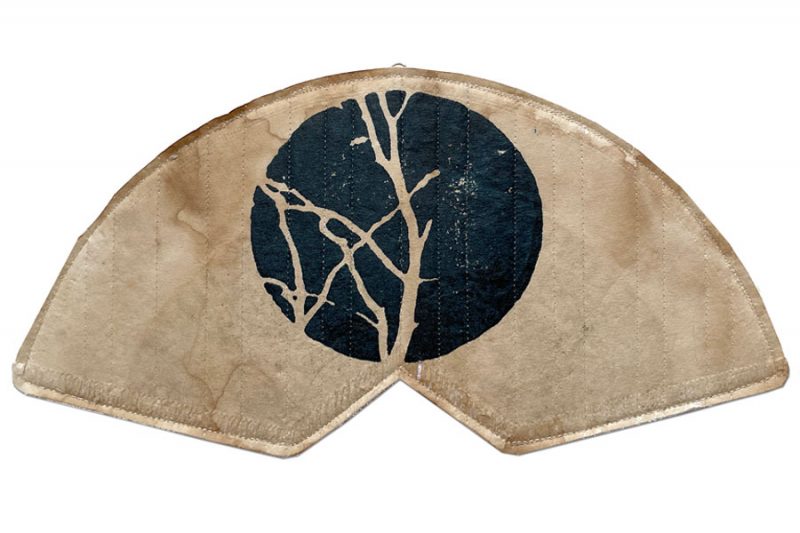 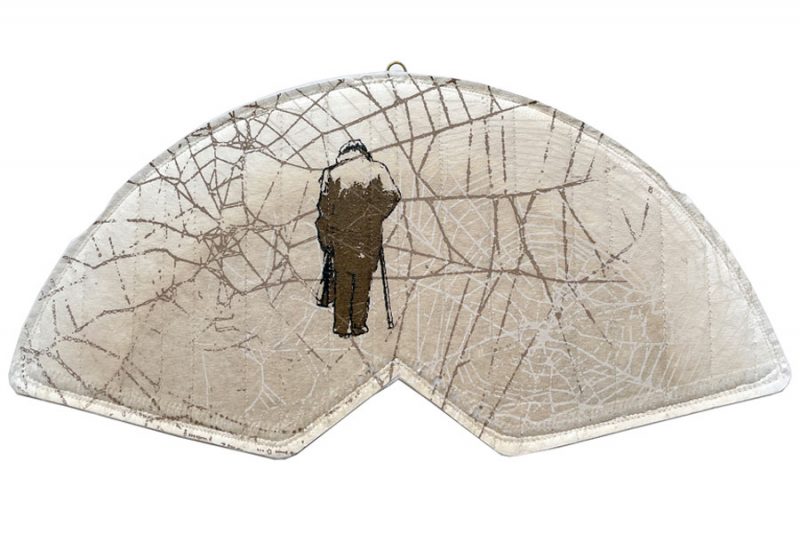 A series of paper mobiles that presents some of my favorite motifs: elderly women, abstract marks, asemic writing or natural phenomena. I screenprint images on used coffee filters. Two filters are stitched together are suspended from monofilament so they slowly spin and move in air currents. 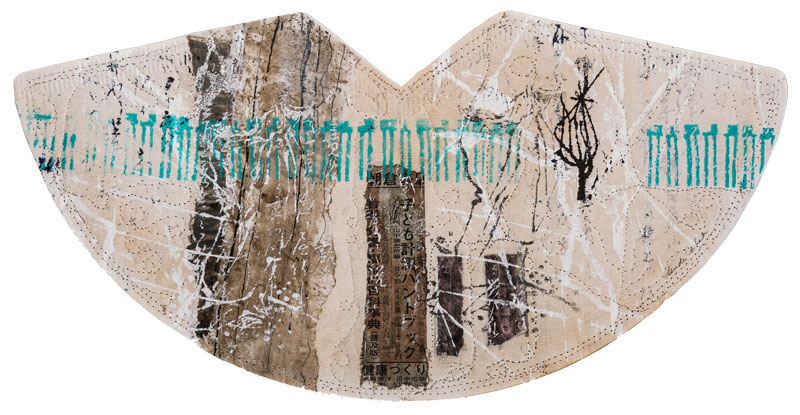 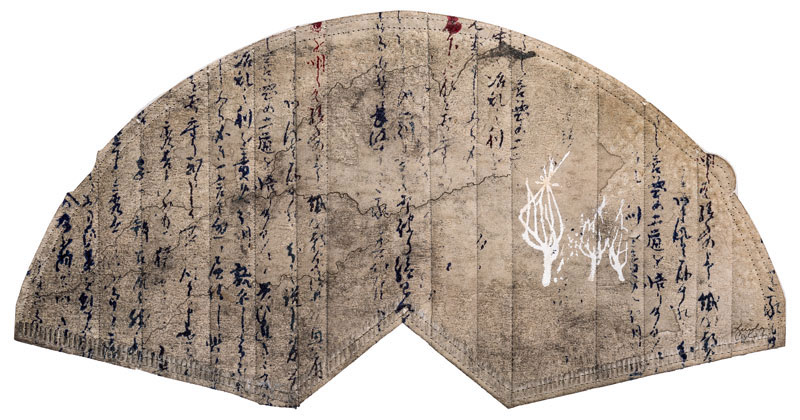 Inspired by the country I visited in 1989 and again 24 years later, the Japanese motifs on these reclaimed, repurposed coffee papers recall the paper fortunes left at temples and shrines. 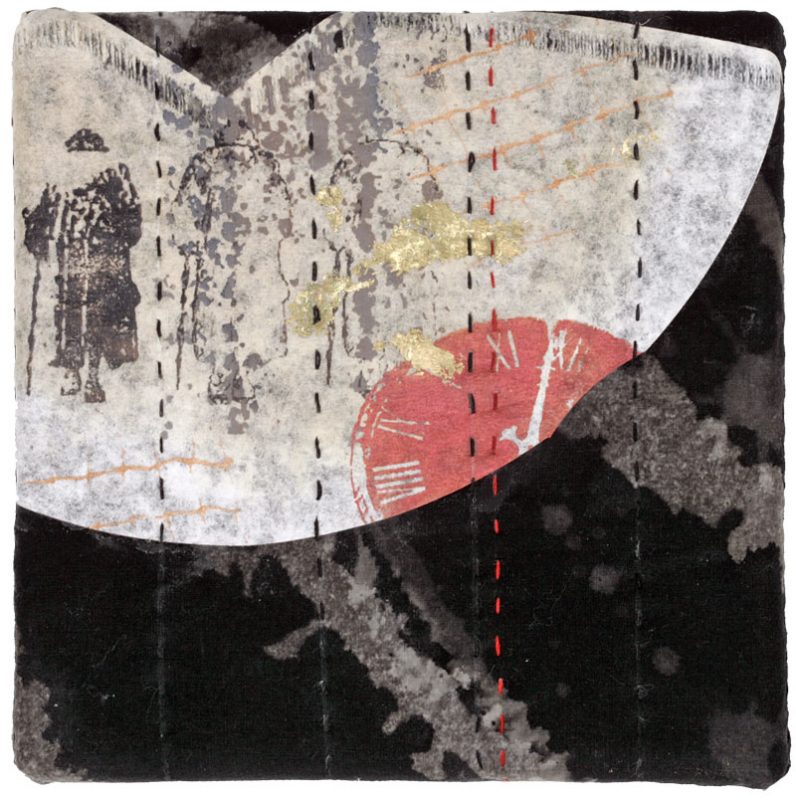 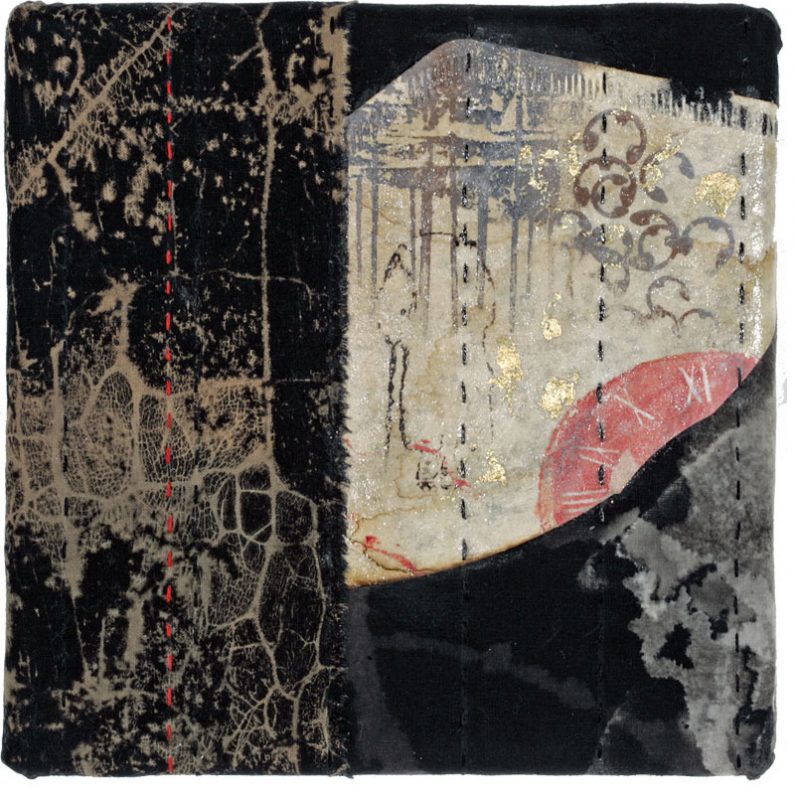 From a series of four small mounted, hand-quilted art works referencing the passage of time, Underpinnings and Passing Grace include a coffee filters printed with imagery of the old woman and a partial clock face. The paper filter is laminated onto black discharged fabric and hand quilted. 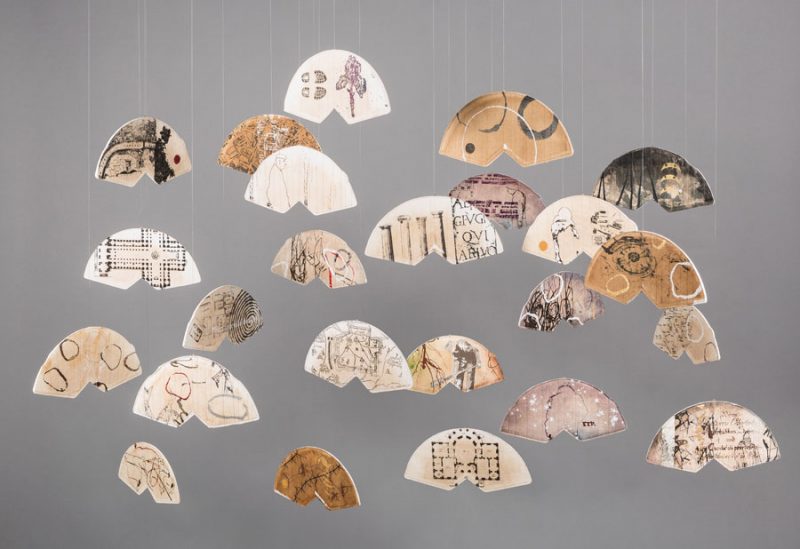 After years as a member the American diaspora, I returned to American and began a series of six kinetic ceiling-hung installations: each is a swarm of 24 suspended, two-sided coffee-filter paper moths or fans that slowly turn in air currents. I chose used coffee filters because for the universality of coffee as a drink. The concept of filtering and moving through echoes the transitory mobility of migration.

A special concern is displacement: people dispersed and reacting to change. They leave a homeland or the ground where they were last rooted. New territory is uncharted to be discovered. Like stones carried by streams, they settle in new grounds. They join other diasporans in a hybrid place called third culture where they mix the old with the new to create a third, very unique place, which is where so many lay down their roots. 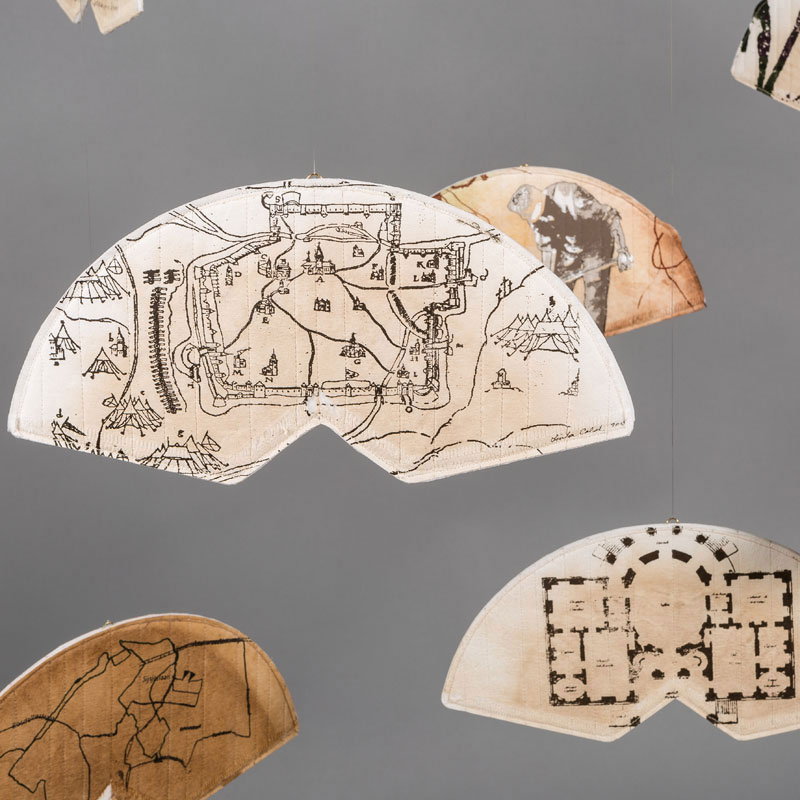 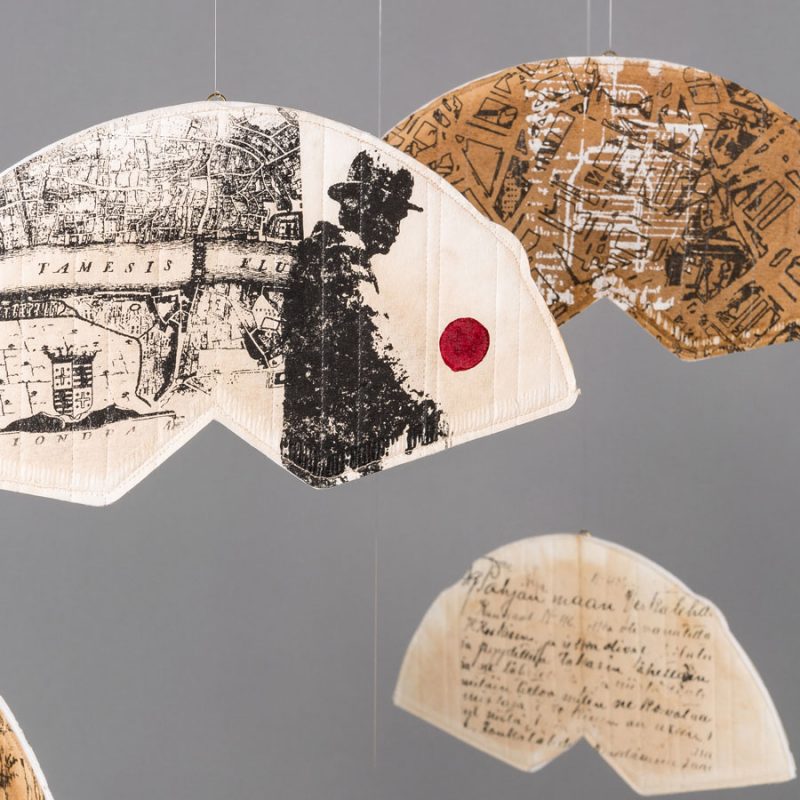 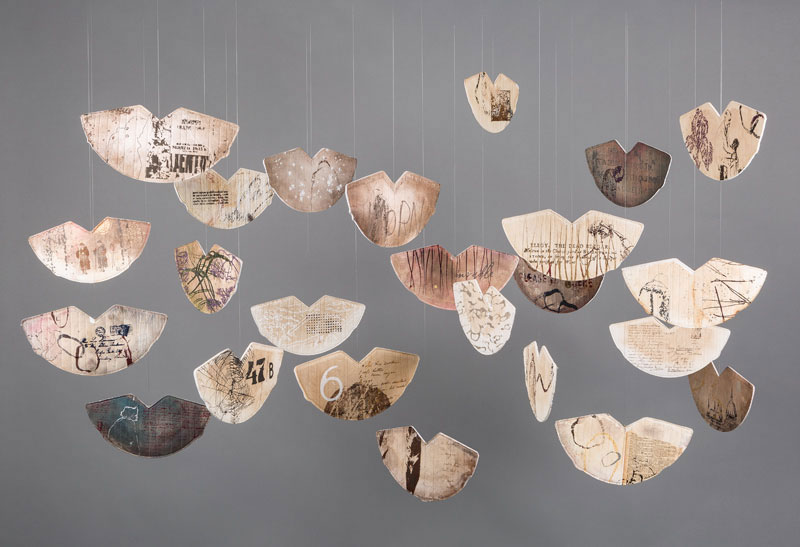 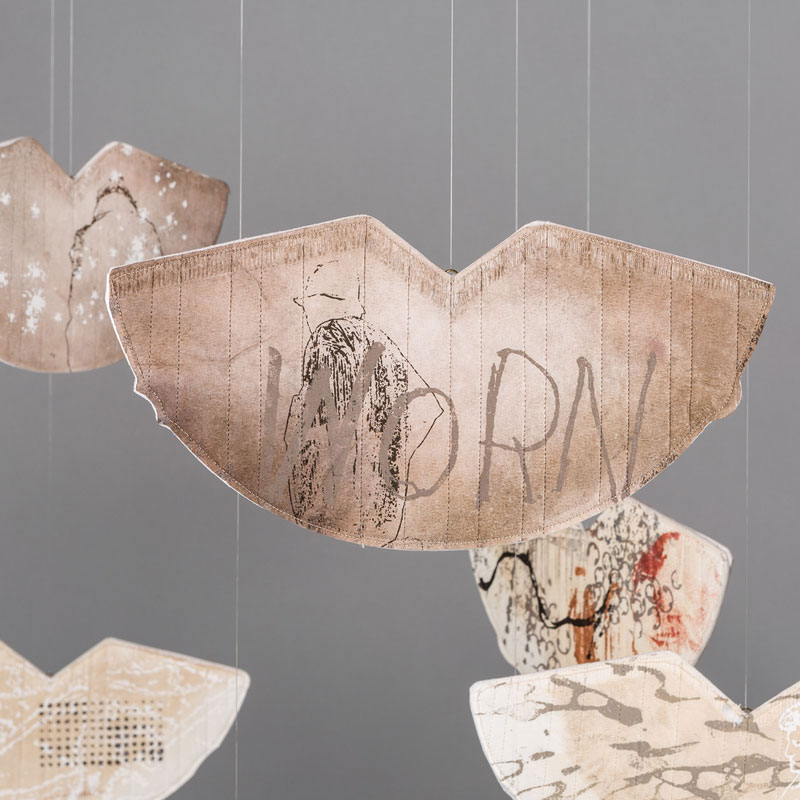 At the border, migrants stand in seemingly endless lines, quietly waiting their turn. The silence they wear is a protection, or perhaps a barrier. Even in a crowd, the individual occupies a space from which to can reach out and communicate or to use as a barrier to avoid interpersonal contact. Coffee filters represent migrants who filter in and out and move silently through layers of society and bureaucracy. As the individual moths move in air currents they never quite touch. The installation hides and reveals the people who migrate. Should they blend, be seen or disappear? They arrive, stay and leave: in but not of. 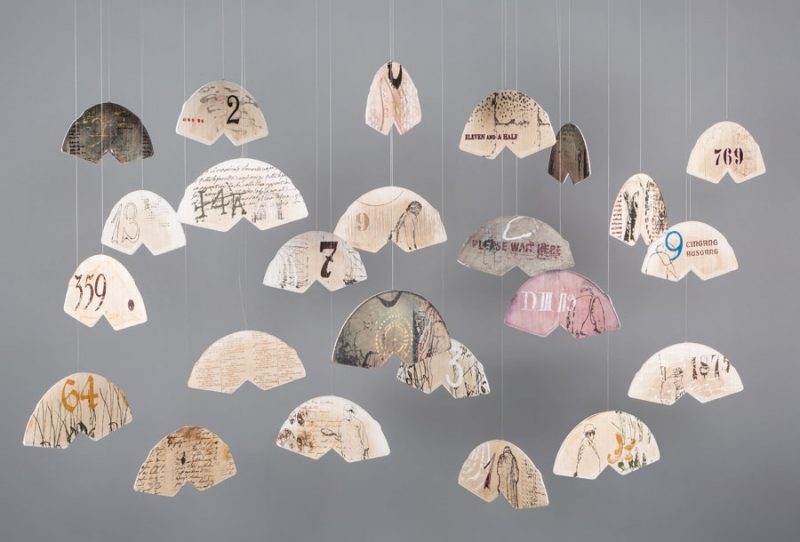 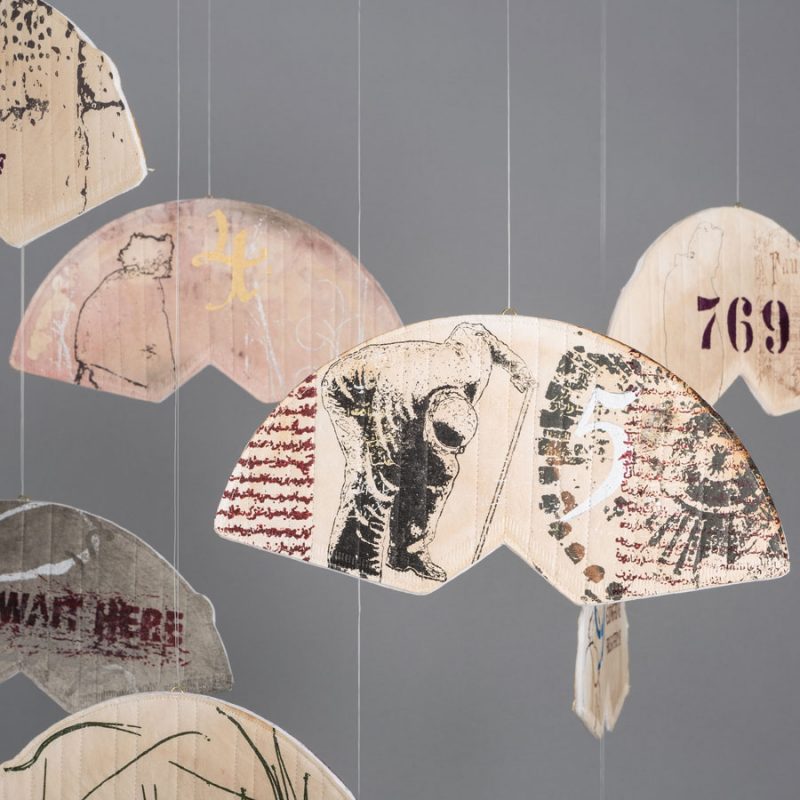 Living away from their native land, migrants must read cultures other than their own where they man experience inclusion or exclusion. I examine existence as resident, non-native, migrant, refugee, expat, exile. A diasporan's identity is often just a number on an identity card or passport: a numeric code, a character, a cypher. "Cypher" comes from Arabic meaning "nothing," a definition that evolved to mean not only "secret writing," but also "nonentity" with no value or influence. 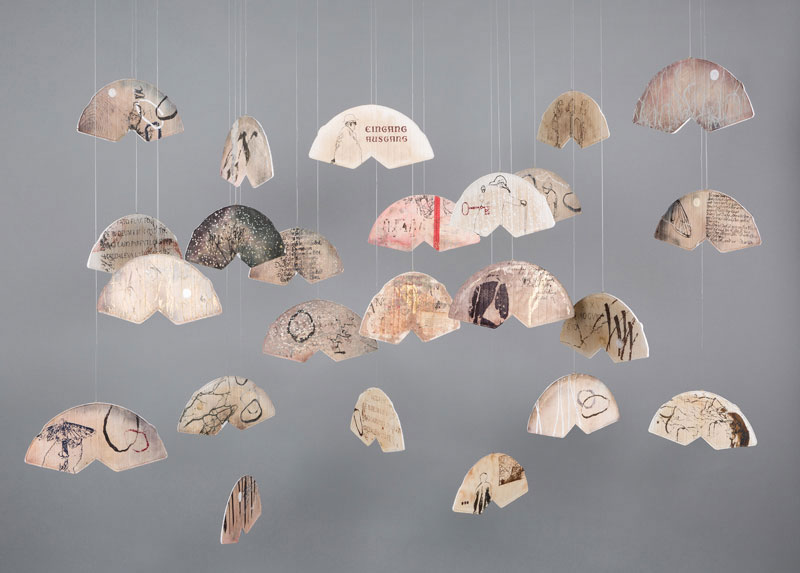 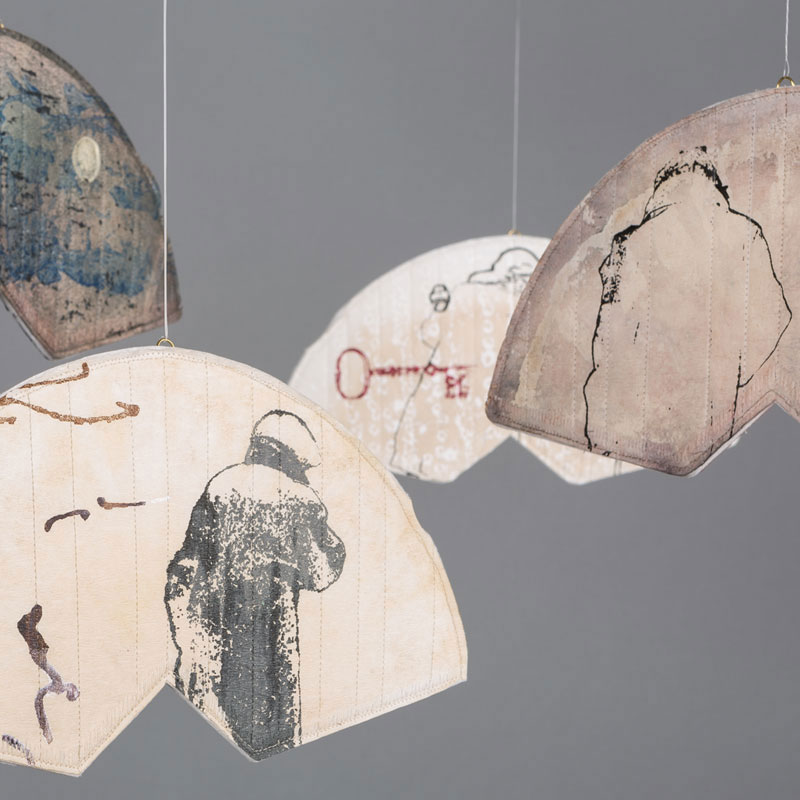 My work examines the relationship between the individual and society. I am intrigued by the idea of edges and margins where migrants, diasporans, refugees and exiles often begin new lives. Migration is flight: whether traveling by air to relocate to another country or fleeing one’s home country, the flow of migration moves on. Regardless of how they get there, the diasporans create new cultures, third cultures: other places of residence that hover between native and visitor. 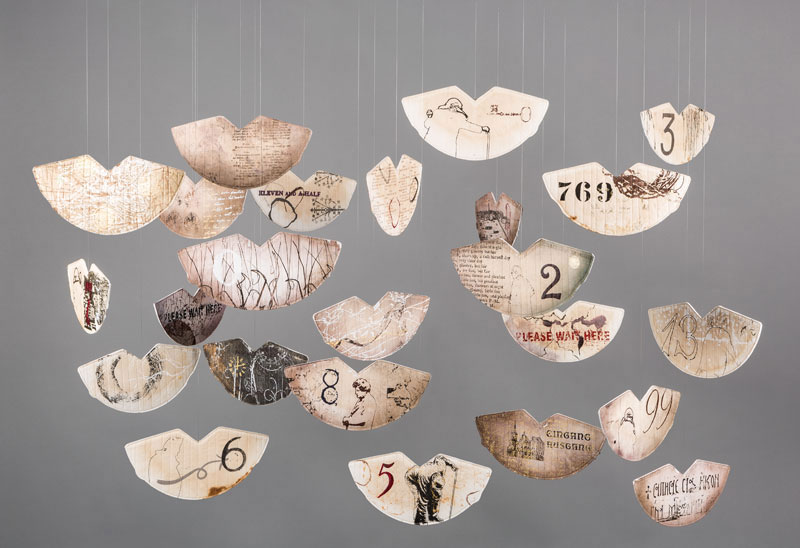 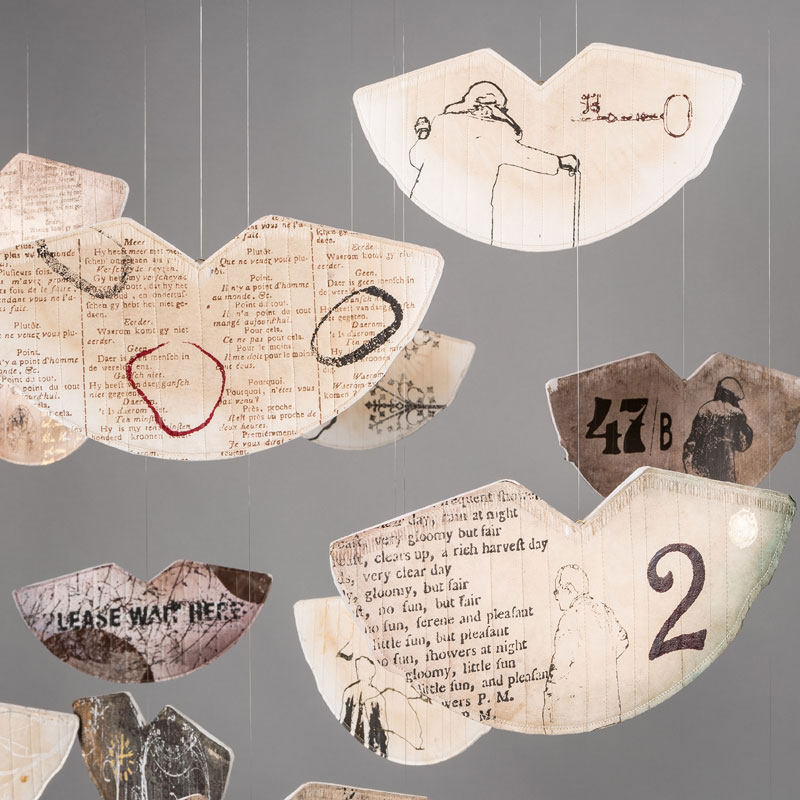 This kinetic installation hides and reveals the people who move. They are the diasporans:  migrants who arrive, stay and leave. They fit only as residents not natives. Their identity is often reduced to a number. Bringing belongings, necessities, maybe some treasures to remind them of home, the diasporans carry also the good and bad baggage of migration in their hearts: regrets, fears, memories, hopes…. 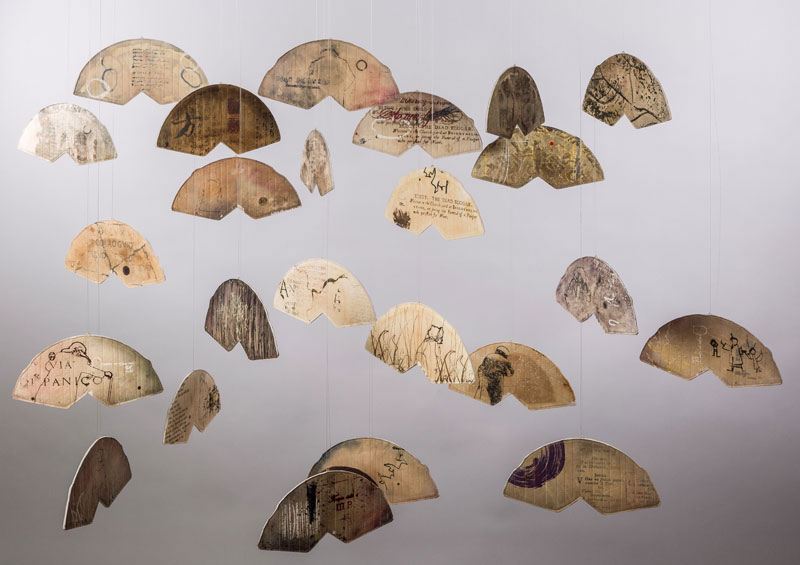 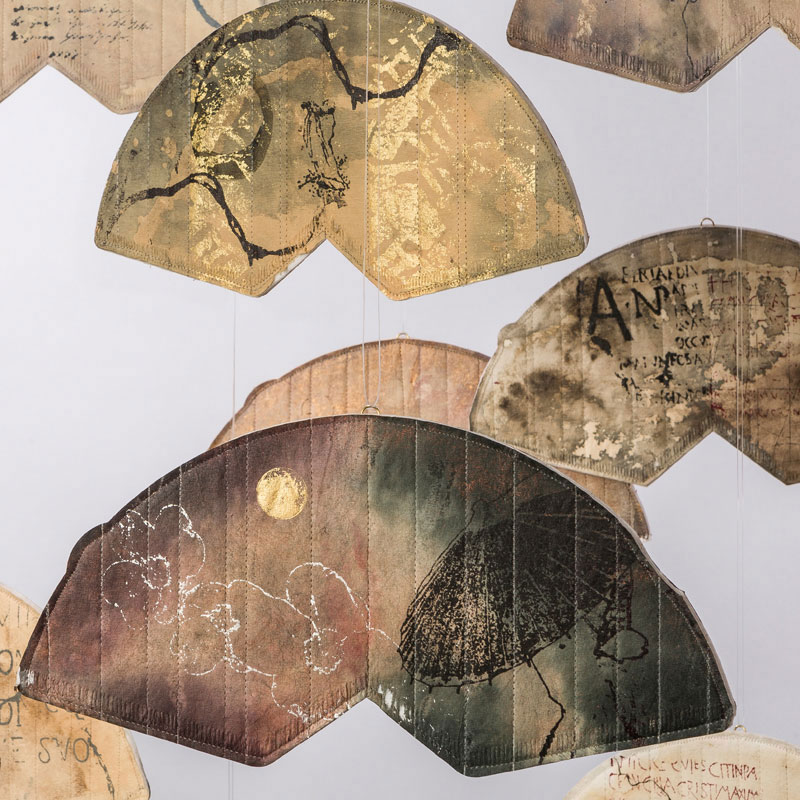 The first of a series of six kinetic installations, Fog & Veil includes imagery associated with refugees, exiles and those who move to countries not their own. Migrants are metaphorically and sometimes really separated from the culture they inhabit as if they are veiled or existing surrounded by a fog. The size of the installation varies depending on arrangement of the 24 monofilament-suspended fans. 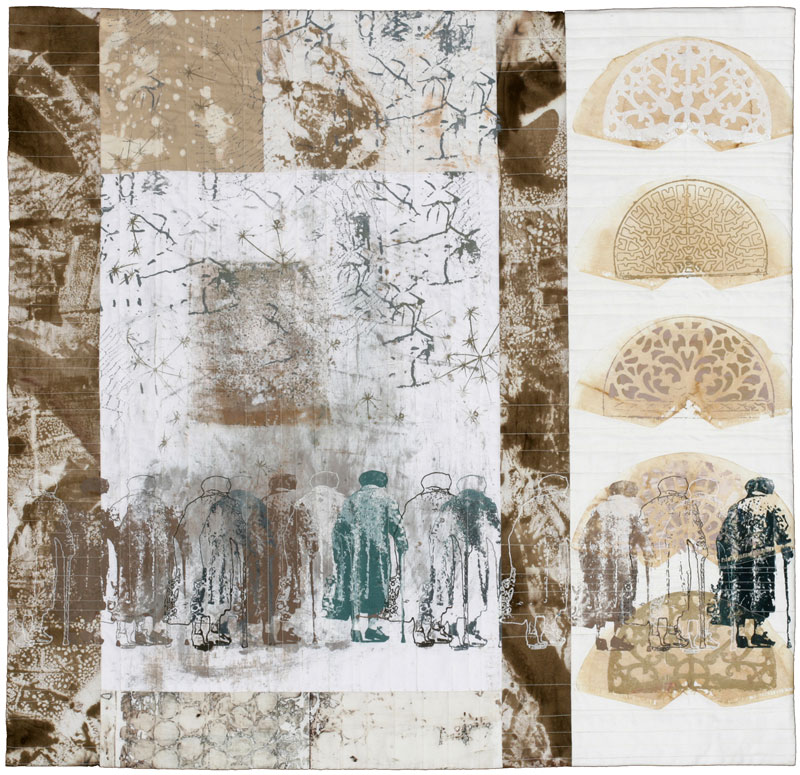 I had no doubt that the woman with her cane crossing busy Moscow Ter in Budapest was made of strong stuff. She reminded me of the lacy, but protective iron window grates that allow light and air into Europe’s urban cellars. Likewise, coffee filter papers are tough fiber constructions. Iron Lace brings together these fragile-seeming but rugged images in mixed media fiber art. 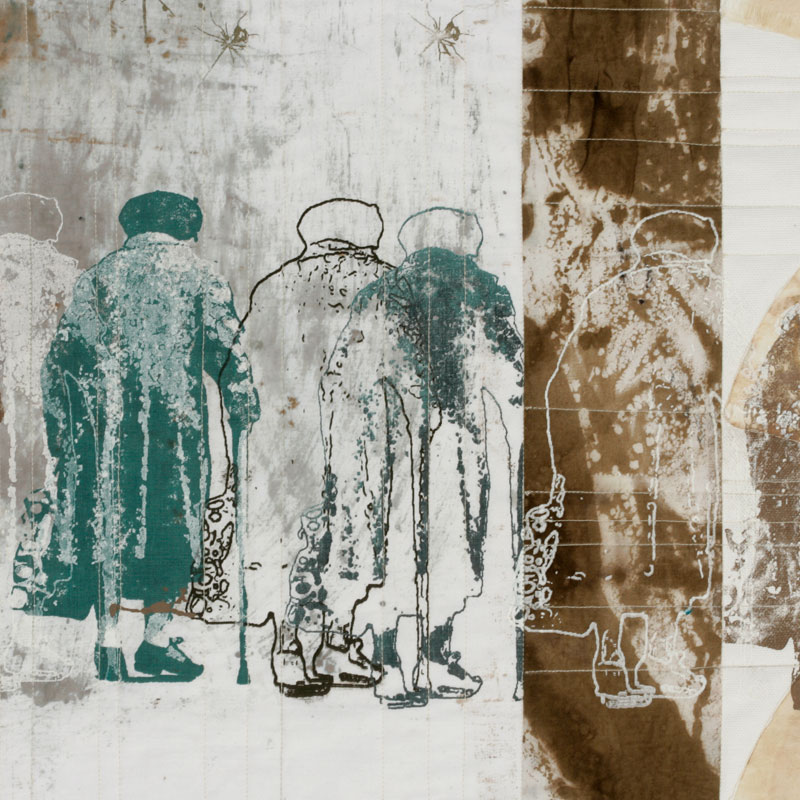 Drawing inspiration from the forested creek landscape where I walk, I collect sticks & branches found where they fall. I choose them for their shape and line. Broken, moved, and sometimes stripped of bark by disease or abuse by cars that run over them, I forage the detritus of violent storms. I think of them as orphans or exiles from the forest. I preserve their story by tracing their lines with thinned paint onto used coffee filters. The stained, sometimes moldy filters are a metaphor for the camps where refugees land. 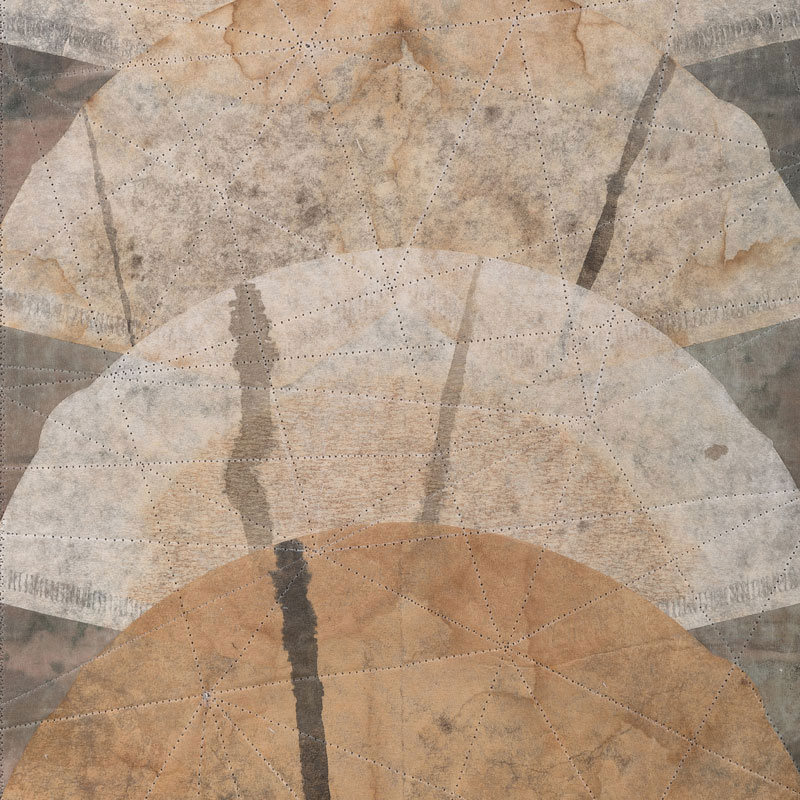 Paper Collage on Board: As an alternative to working with cloth, I often turn to torn and cut papers collaged on small cradled boards. Composing bits of old papers, ephemera, used coffee filters and fabric with glue or acyclic medium offers a different medium but similar design and construction processes to layering and sewing cloth together. I often add print, marks, leaf, paint or stain applied to the collage surface. 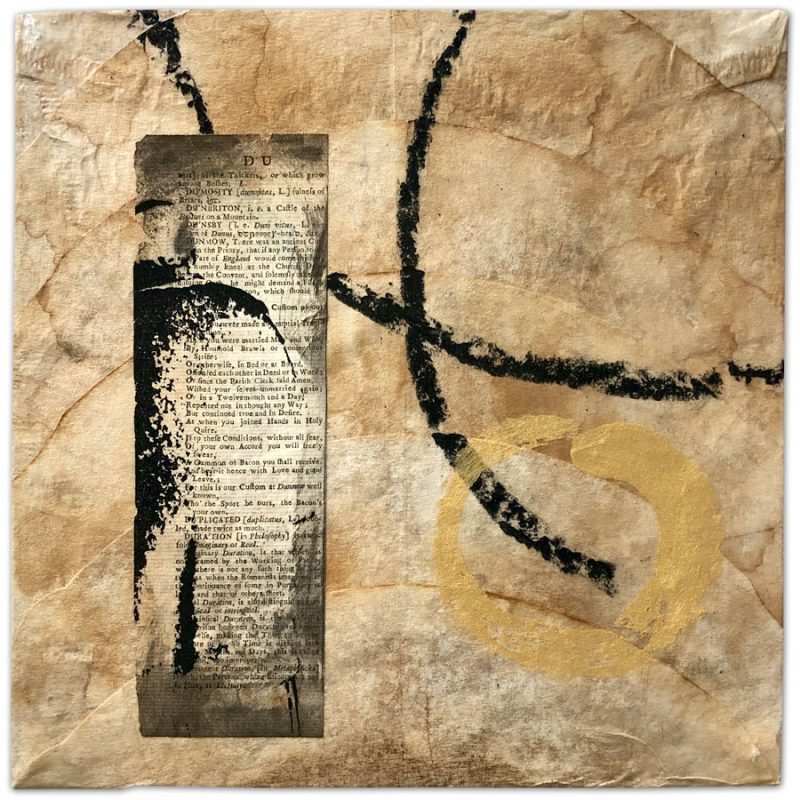 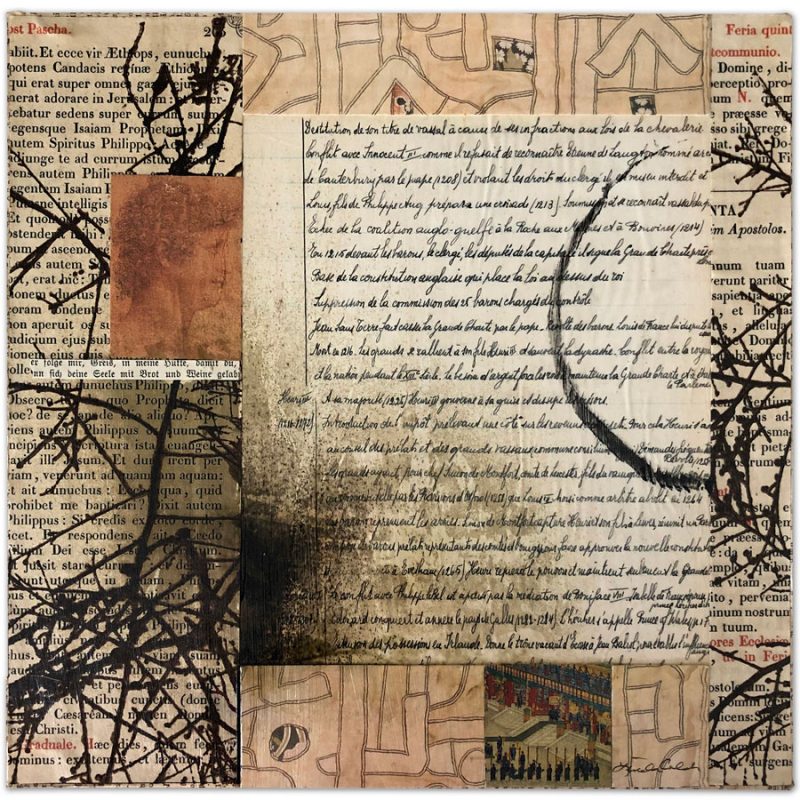 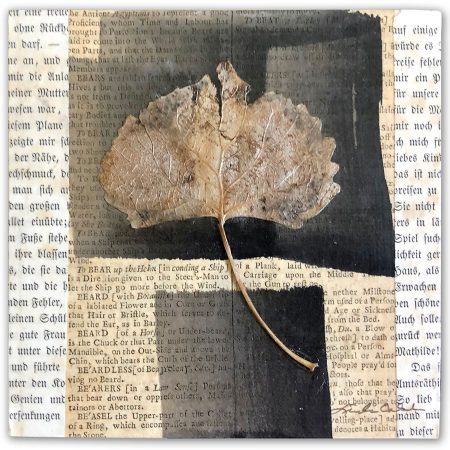 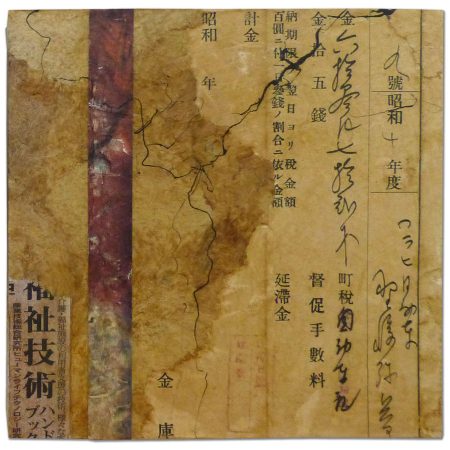 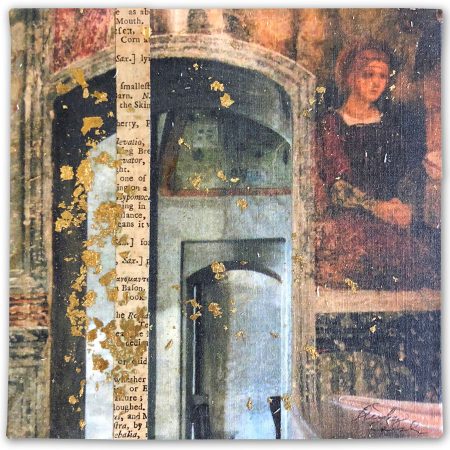